In the state of Utah, it is the law (now) to buckle up.  The state seatbelt campaign's slogan is: Click it or Ticket.  Unfortunately, in 1991, when I was 18, buckling up was not the law.  My family (my mom, my two younger sisters, and my little brother) decided to head to St. George, Utah (about 4 hours from where we lived) to see a family friend run in the annual marathon.

One of my sisters had recently gotten her driver's license and was going to get in some practice and drive us there.  As we hopped into our brand new station wagon, my mom told us all to put on our seatbelts.  She and my sister were in the front seats and they had automatic seatbelts (which were a thing back then).  Those of us in the back, opted to not wear them, as they were not comfortable.

We were on the freeway and after about an hour or so on the road, my sister somehow overcorrected the car.  Our car rolled 4 times. We were headed south and ended up on the opposite side of the freeway facing north.  Luckily, we did not hit anyone else, but my youngest sister and my brother and I were ejected from the car going at least 55 mph (the speed limit back then).

I believe it was no coincidence that here happened to be an emergency room doctor traveling right behind us.  He had one bottle of saline solution that he poured into an open wound in my leg.  I broke both of my femurs; one was a compound fracture (where the bone comes through the skin) and the opposite femur was broken and my hip was displaced, making that leg have no pulse.  The doctor was able to push it back into place and it gain a pulse.  When he first walked up to me he thought that if I were to survive, I wouldn't have my legs.  But somehow, I survived, and my legs survived, and I am grateful that he was there.

I also broke my nose, shattered my left orbital floor, cracked the back of my skull (which makes your eyes swell), broke my left clavicle (which punctured my left lung) and broke my left knee - many of my injuries were on my left side, as I was told that was the side that I landed on.  Along with many scrapes and road-rash that left behind many scars.  They also found that a rock was blocking my windpipe, once I was admitted to the hospital.

My other sister who was ejected, broke one of her femurs and had a hairline fracture in her pelvis on the opposite side.  She also received an internal head injury, which was temporary (luckily).  My mom and other sister were alright because of their seatbelts. Unfortunately, my little brother (who was only 9 years old), did not make it.  They actually were able to revive his body at the scene and he was then life flighted to the children's hospital, but sadly, he did not have any brain activity.  The following day, my dad (who was not with us in the car because my parents are divorced) had to make the most heartbreaking, toughest decision of his life - to have life support turned off.

It was a long recovery.  When I first became somewhat conscious, I heard my dad's voice telling me that I was in a really bad car accident.  He told me that I already had rods in both legs, a plate under my left eye, and tubes breathing for me and feeding me.  I was in ICU for a while and in the hospital for a total of two weeks.  Once I was able to be released from the hospital, I was was transferred by ambulance to a local rehabilitation center. I lived at the rehab for the next 3 months, and got around by wheelchair.

My sister who was ejected also was admitted to the rehab for a while, and it was nice for us to have each other there.  It was a long road to recovery; A LOT of physical therapy and eventually learning to walk again.

That day changed my life forever and I am a different and stronger person because of it. Since that day, there hasn't been a day that has gone by where I haven't worn my seatbelt.  My brother's picture was used in Utah's Hold on to Dear Life seatbelt campaign, and when wearing seatbelts finally became a law I was so happy.

I always make my kids buckle up and they know the "Click it or Ticket" slogan.  The other day, we passed a billboard that said "Buckle up your precious cargo".  That phrase really hit me in a new way.

Of course I have shared the story of the car accident with my kids and I stress how important it is to wear their seatbelts, but seeing that billboard gave me an idea of another way to help my kids understand the importance of buckling up.

I pointed out the billboard to them and then gave them the example of when a truck is carrying items in the back, the items are strapped in tightly with rope to keep things from flying out of the truck.  I asked them "If you were to put your favorite stuffed animal or toy in the back of a truck, you would want to buckle it up and protect it, right?" They agreed.  I let them know that THEY are my precious cargo and that I would never want them to fly out of vehicle because they weren't buckled up.

I think that gave them some more understanding (by putting it into their perspective of thinking about their precious things).  If your kids are struggling with not wanting to buckle up, maybe explaining it to them this way will help them too.

My kids are pretty good about it, but they like to get unbuckled when we are 'almost' home - which is not ok. I've been stressing that just because we are close to home doesn't mean that you can't still get into an accident (and then I tell them the story of one of my best friends who got into an accident just down the street from her house).

Click here to check out what the laws for seatbelts are in your state.  But whether it's a law or not, I urge you to please, buckle you and your loved ones up - EVERY TIME you get into the car.  It's also so important to follow the car seat laws for your state and have your littles properly restrained.  Click here to see what those laws are in your particular state. Stay safe out there and always protect your precious cargo! 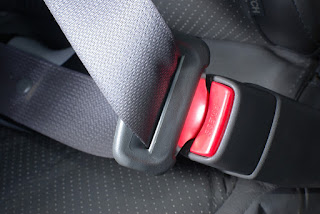 Sometimes, you end up outside when you didn't plan on it.  You are running errands and the kids are restless and you hit a park or you go to an activity and part of it ends up being outside, or you are planning to be outside for just a little bit and it ends up being a lot longer, etc.

I don't like being caught out in the sun for longer than expected without protection for my kids and I (and husband too), so I bought this cute travel container (see the blue/white striped bottle) at Target and I put sunscreen in it.  I tossed it, along with sunblock lip balm (Sun Bum is my fav), into a ziplock sandwich bag and keep it in my purse all summer long.

Now I won't get caught un-prepared for the sun, and none of us will get an accidental sun burn.  Although I don't think we've ever gotten one on purpose either - LOL!

My favorite sunscreen of all is DeVita.  I use the DeVita Solar Body Moisturizer for our bodies and kids' faces, and I use the Solar Protective Moisturizer for my face in the mornings- because it blends amazing under makeup.

These DeVita sunscreens received a #1 ranking (which is the highest) on the EWG (Environmental Working Group) website, where they test and review safety for sunscreens.   I always check the EWG's sunscreen guide before I buy any sunscreen. 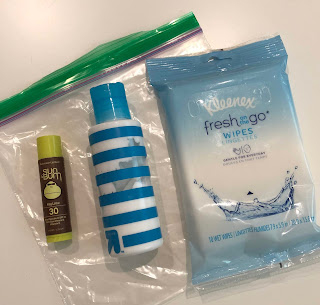 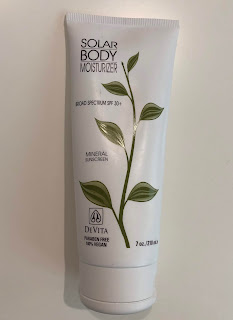