My Pregnancies and Health Tracking

Do you track your health using an app?  I do, using the app (Period Tracker Plus) that my husband created for me while we were trying to conceive.  Here is how it all started....

My two younger sisters both got married about 10 years before I did.  One of them got pregnant and shortly after finding out that they had a bun in the oven, they got married. She and her husband continued to have four more children over the years, eventually having five total.  My other sister got married not long after our other sister.  She finished school and worked for a couple of years and then started their family, having four kids.  Once they decided to have kids, they did the deed and.... bam! They were pregnant!!!  That's how easy it was for my Mom too.  Me?  Not so much...

For some reason, I didn't want kids.  That's right, Know It Mom did not want kids.  I mean I really did not want them. I didn't feel the desire and I didn't feel like I had a maternal instinct.  I had even once spoke with my OBGYN about having my tubes tied.  He said he would do that for me whenever I wanted, but something told me to hold off.  Even as a kid, I played with Barbie dolls, but didn't play with baby dolls.

When my husband and I were dating, he'd often tell me how much he wanted to have kids someday.  I was very honest and told him that I really did not want them, and I was sorry that I felt that way but it was the just how I felt.  People would often say to me "One day your biological clock will start ticking, and then you'll want them", but I was very confident that would never happen to me.

My future husband and I had several conversations about how we felt about having kids.  At one point he told me that he loved everything about me except the fact that I didn't want kids, threw a wrench into things.  He didn't bring it up again, and lucky for me, he did end up asking me to marry him anyway - whew!

I'm really close with my Mom and we would often go shopping together.  She would always stop and comment on the cute baby clothes that we'd pass by.  I'd always say "Yeah, yeah, cute.  Let's get shopping".  Until one day, I was the one commenting on the cute baby clothes and I started going ga-ga over the cute baby in the stroller at the mall.  What was happening to me?  I guess my biological clock really was starting to tick.

To my great surprise, a couple of years into my marriage,  I suddenly really, really, REALLY, wanted to have kids.  It was like someone had flipped a switch, or started a clock - haha!  I was in such shock that I felt this way.  Had I been possessed? I truly thought I'd never see the day!

So, the decision was made, we were so excited to finally start a family of our own.  Let me just say, now that I am am Mom, I am very maternal and love my kids immensely.  I feel bad hat there was ever a time where I didn't want kids, but there was, and, I am SO glad that changed.

Once we started trying, I was surprised that it didn't just happen right away, like it had for both of my sisters, and my Mom.  I wondered what was wrong with me?  Was something wrong with my husband? We had some tests done and everything looked fine.  We continued trying for a year and then finally got pregnant.  We were ecstatic!!  My husband's 40th high school reunion was that weekend, and we were telling all of his former classmates that we were expecting.  I told my Mom that day, but not any others yet, as I wanted to be further along, just to be safe.  I went to see my doctor and he calculated that I was about 6 weeks along.  Wow!

Just a couple of days after the reunion, I woke up one morning and was bleeding.  I was so worried! I called my doctor immediately and they had me come in for some tests.  Sadly, I was miscarrying.  I was heartbroken.  I was so excited to have my first baby.  From the moment I had found out that I was pregnant, I saw a whole new future ahead of us, and we both pictured what it would be like having this child in our lives.  Suddenly, all of those dreams were gone in an instant.  It was SO hard.

But after a little while, we started trying again.  My doctor had instructed me to keep track of several different things, on a calendar.  I was tracking my basal body temperature each morning to see if I was ovulating, I was tracking our intimacy, cycle days, periods, etc.  During this time, Apple had just announced that developers could start making these things called "Apps".

My husband was a computer programmer and knew that he wanted to try making an app, but wasn't sure what kind of app to make.  One night, after I had just hopped into bed, I got frustrated because I had forgotten to write down all of the things I was tracking for that day.  My husband then asked me if I'd like to have an app to track all of these things with.  "Yes!",  I exclaimed.  And that is when Period Tracker Plus was conceived.

My husband began learning how to develop apps (self-taught), and began working on it right away.  Meanwhile, we continued trying to conceive, with no luck.  My doctor told me that I was AMA.  My doctor explained to me that AMA means Advanced Maternal Age, and because of that, he started me on a fertility drug called Femara.  After taking Femara for 9 months, with no luck, he prescribed me one round of Clomid (another fertility drug) and told me to give it a try for the next month, and if it didn't work, he wanted us to go to a fertility clinic.

I was taking the Clomid but wanted to be ready to start IVF as soon as possible (when my next cycle started).  So we went to the fertility clinic. My husband and I both had tests done and we were ready to start the IVF process.  However . . . my period never started.  I took a pregnancy test and was SO relieved to find that the Clomid had worked - we were pregnant!!!

Not long after I found out I was pregnant, I was at work one day and went to use the bathroom and found that I was bleeding again.  My heart dropped and I was so worried.  I called my doctor and went in right away.  He put me on prometrium (progesterone) to help thicken the uterine wall and hopefully sustain the pregnancy.  For the next 8 weeks I continued to bleed, and I was terrified every day.  It was so hard to feel excited about my pregnancy because I was worried that I could lose this child any second.  My doctor kept a close eye on me, and luckily after the 8 week mark, the bleeding stopped.  Then I got excited.

I continued on to have a healthy pregnancy, and at the age of 36 I gave birth to a heathy baby boy. During this time, my husband continued to work on the app.  A few months after my son was born, the app was finished and released into the app store.  The app has many features, one of which is an ovulation tracker that predicts when you are most fertile (based on the period information you enter).  Once our son turned one year old, we decided to try for a second child.  Based our past conception trials, and being at Advanced Maternal Age, we wanted to get started.

I used the fertility predictions in the app and after only four months of trying, we got pregnant with our second child, without having to use any fertility drugs this time around.  We were so excited, however, only a little while after finding out I was pregnant, I began bleeding, just like the previous pregnancy with my son.  My heart dropped again, and I put the brakes on my excitement.  I immediately went to see my doctor and put me on prometrium again, as we hoped for the best.  I continued bleeding until the 8 week mark (just like the previous pregnancy), and I got excited again. At the age of 38, I delivered a healthy baby girl.

Besides my very first pregnancy where I miscarried, both of my other pregnancies were identical.  Bleeding for the first 8 weeks (to the exact day), and delivering both babies on exactly on the 39th week.  It's almost like I had twins, but two years apart.  Because it took a year for each of my first two pregnancies, and that I had to use fertility drugs for the conception of my son, I was surprised how quickly we conceived our daughter.  They say that once you have a child, it's easier for your body to conceive, but I also really believe the app helped us get the timing just right.

The app tracks everything you need to conceive a baby, and it also tracks weight, exercise, sleep, moods, and so much more.  It also has custom items so that you can track anything you desire.  The app is free, or you can subscribe (monthly or yearly) to track even more.

I love this app, and it's predictions are spot-on.  Now that I'm a little older, I am in perimenopause and have super heavy periods. I NEED to know when to expect my period because I usually can't go anywhere the first day or two of my cycle.  It also really helped me track my weight while I was pregnant and when I was trying to lose the baby weight.  The app also has daily affirmations (which I collect and write), helpful articles, period polls that you can take (and see what others experience), a fun game, and even music (DJ sets by my husband, aka DJ Flatcracker).

I love how we got the inspiration for the app and that it helped me conceive my little girl so quickly.  It really is an amazing app which you can use in any stage of life, and it's free.  It's on the app store under Period Tracker Plus.  You can also visit us here. 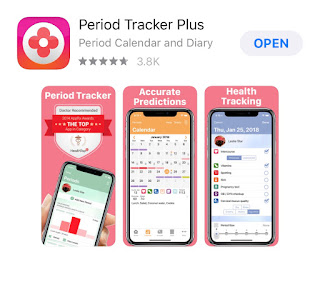